My new wheelchair developed a fault. The manufacturer insisted on checking it — in Poland — and after months of hesitation I shipped it there, just in time for Europe to shut down. Now my old chair, after serving me well for fifteen years, is on its last ‘legs’. What’s a poor boy to do?

Soon after taking delivery of my new GTM Mustang wheelchair, at the beginning of 2019, I noticed that the right-hand front caster was spinning idly above the ground. Just a mil or so and, with me aboard, the problem went away. However, since I feel that having all four wheels touching the ground is not much to ask, I asked (dealer) Cyclone Mobility to investigate. The managing director’s swift reaction was, “We’ll pick the chair up and have a new one made.”

They did indeed pick it up but, a day later, mysteriously pronounced it fixed and sent it straight back. It wasn’t long before the problem reappeared. An engineer came out and fitted some washers but that also proved a temporary solution. Eventually Cyclone got in touch with Warsaw-based GTM Mobil to arrange a replacement frame, but they wanted to look at it first, in Poland.

I couldn’t understand why they could not accept the video evidence I had supplied, clearly indicating the problem. Why would they need it before making a replacement? Did they intend to put it back in the jig and twist it back into shape? Would that guarantee a lifetime of stress-free stability? I didn’t get it.

Over the next six months my relationship with Cyclone became strained. They took ages to respond to my enquiries and, rather than representing a dissatisfied customer against a supplier who was at fault, the MD  saw himself as a “man-in-the-middle” who should not take sides. A wheelchair user himself, he didn’t appear to ‘get’ how removing my primary mode of mobility would affect my life. He knew why I had ordered the chair in the first place.

After several false starts and, as we now know, with impeccable timing, I let it go. That very evening, sitting on the sofa with my old chair to one side, i discovered that one of the forks was twisted. Panicking, I grabbed the phone and sent Cyclone an email expressing my frustration, threatening legal action and God knows what else, if they didn’t send it right back. It wasn’t, I admit, my finest hour — I should at least have slept on it. And as Linda pointed out to me, several times, I shouldn’t have let it go at all.

Cyclone responded in a rather hurt manner and I found myself calling to apologise for my outburst. We agreed it should go after all and the MD promised that GTM would give it priority. Last I heard, GTM was running a skeleton operation in Warsaw, no doubt prioritising social-distancing instead of fixing my goddamm chair.

Will I ever see it again? Did I mention it cost two-and-a-half grand? Will GTM and/or Cyclone survive the shutdown? When will my old chair finally collapse? Will Johnny be reduced to bum-shuffling round Sombrero Towers like a street cripple?

Oddly, he is remarkably sanguine about that distinct possibility. After 35 years of this bollox, t’is but a small step. So to speak. But I don’t think much of the customer service.

It’s a wheelchair folks, not a wild horse, but as I decide whether to buy it, you can tell it’s the sort of chair Johnny ought to have. He was measured up for one the other day, the way one might be for a decent suit. But instead of polite enquiries about the number of cuff buttons or whether or not to go for pocket flaps, I was offered titanium push-rims (+ 200 quid) or red-leather upholstery (another 140). No to both of those. As long as I don’t get friction burns on my palms, I don’t mind. And frankly, the more nondescript the bloody thing, the better.

I calculate this will be my seventh chair in, what, 33 years of life as a paraplegic? I don’t forget noticing from my bed at Stoke Mandeville, one of a small stack of brand-new black/chrome government-issue devices, with HEALEY scrawled in black felt-tip on a brown tag. I remember feeling depressed for a while but what did I expect? 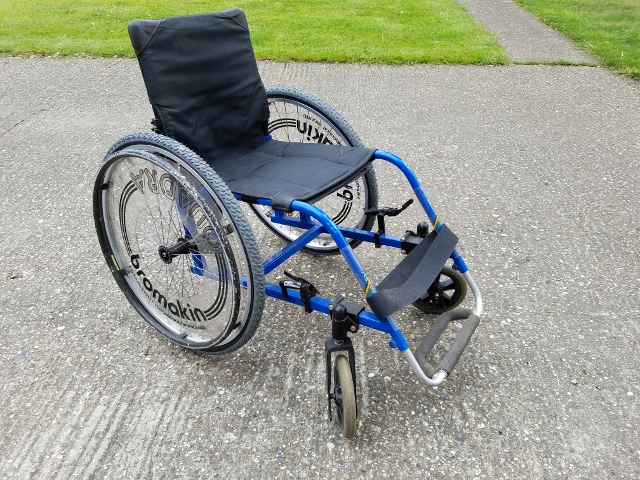 My second chair was a heavy blue Quickie (yes, really) Quadra, currently resident in my garage. Once I have replaced a missing spacer I shall donate it to a worthy cause.

No.3 was a red XLT (Extra-Light Titanium) that really was light; I sold it after shorter wheelbases became the norm. Four came from Bromakin, a supplier from Loughborough that for a while built its own and was run by folks who I preferred to my local bunch of sharks. It’s also titanium, unpainted, and I keep the frame as a spare.

Not so Quickie, these days.

And five, another Quickie, is now nearly knackered. Ten years of bouncing down kerbs and jamming castors into ruts have taken their toll. I also depend on it far more than I used to, I think it’s been through three sets of tyres (kevlar-lined so zero punctures), but several sets of tubes as said tyres are a bitch to put on. One stat I do know for sure is that, in 32 years of navigating the world in one of these chairs, I have rolled through exactly one pile of dog-poo.

I thought about replacing my Quickie with the Tigra but have decided that weight, or lack of it, is everything. By dispensing with the folding forks I can save at least 2kg and 600 notes. The Mustang fits the bill so if I can find the dosh, I may well go for it. I have gone for the unpainted look, since you ask.

Look at me, not the fucking chair.