On watch with our CO, Lt Cdr Nico Franks

But not until October, en route to and from a diving trip in the Philippines. Johnny is seeking commissions for both adventures. It will be his first visit since 1974 when, as a skin-and-essence 21 year-old Sub Lieutenant, he spent a year navigating patrol boat HMS Monkton from Victoria Basin, in the heart of the then British colony.

I arrived in June ’74, fully expecting to be deployed for social duties only. One of five patrol boats in the squadron led by the Salisbury-class frigate Chichester, we would set sail for day-trips two or three days a week, rarely in the dark and never at weekends. We patrolled the limits of the colony’s waters and I must have done a decent job as I cannot remember any dramas (there are admittedly few underwater hazards). I water-skied behind her once. 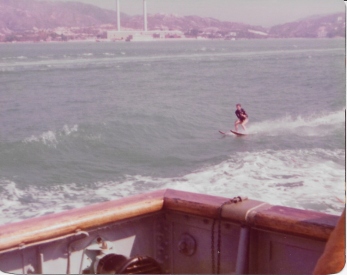 It can be done at 15 knots. Just not for long

It all changed during our annual deployment further south, in August of that year. We sailed to Bangkok and thence to Singapore, where our ships’s company was one of the last to experience its less salubrious side, in Bugis Street and its environs. Kai-tais and Merry Monks abounded. Very soon the burgeoning cruise ship market and its better-heeled clientele would necessitate a swift overhaul. (I visited again the very next year and there was no trace of the bars, brothels and massage parlours.)

We were about to sail for Penang before being recalled to HK, where the government had decided to put a stop to the increasing flow of IIs (illegal immigrants) who were making the perilous journey from the People’s Republic to the better life they expected in the British colony. We had already encountered a few; most were being smuggled by junks but the most desperate swam for it, sometimes aided only by inflated plastic shopping bags.

Unfortunately, between us and Harry Honkers lay a typhoon, one of several that plague the region each summer. Our passsage north therefore involved some pretty lively weather, less than ideal conditions for a wooden-hulled former coastal mineweeper. With the sky obscured for three days I was forced to navigate via Dead Reckoning, plotting our last known position on the chart and using corrected course and speed to predict our track. When the stars finally appeared and I could take a sight, we were only a mile or so off track.  After three days in the middle of a storm that’s nothing!

On our return to HMS Tamar, we soon discovered that life had substantially changed. Two of the boats would henceforth be required at sea all the time, to recover any IIs we could find and hand them over to the police for repatriation. I know, even at weekends. AND in the dark!

We worked quite closely with the professional and surprisingly firm Royal Hong Kong Police in their launches, joining them on numerous night patrols into the border regions of the New Teritories. We picked up a few swimmers who were alive (and heard of some who weren’t, having allegedly been attacked by sharks) and stopping both junks and sampans that mostly turned out to be innocent. I remember wearing an empty yet still surprisingly heavy 9mm Browning automatic at my waist and it may have been about then that I realised that, while clearly an ace navigator, I was not destined for great things as a leader of men. 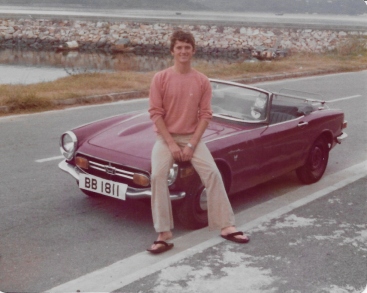 During my 2017 stopovers, I will have an opportunity to see how life has changed. Victoria Basin (visible on the right in the headline image) and HMS Tamar are definitely no more and our various bachelor haunts will surely have been absorbed into the world of international commerce.

Johnny’s life has changed too, and he will want to see how easily an independent wheelchair user navigates the high-rise skyline of his former posting.

Johnny has been riding this for more than a year now. The first trike to cost less than £2k, it’s lighter than his previous Quickie Shark and has a more efficient disk brake. The matt black colour is cool but it’s not exactly hi-viz. Mind you, neither is a black dog.

I was disappointed at the customer service from the manufacturer and dealer. I was charged full-price for the upright seat option and, once it arrived, had to swap it with the standard recliner (it’s outside my office right now. Anybody want it?). I specified Schwalbe Marathon tyres for the rear wheels and they arrived in the crate loose, along with the bare rims (and they are a pain to fit). The deraillieur gears and disk brake had not been touched and I had to lug the whole thing to my local bike shop.

Anyhoo the design is simple, which is a Good Thing, but the result is minimal real-estate for carrying drinks, tool-kit and coat. The drive-train is slick but needs regular tuning, and twin cables run in extremely tight bends from the (RH) hand-crank, so they don’t last. Roll on an affordable electric shift. You can’t change the chain-wheel while pedalling, but there is a way round that. If required, the footrest straps can secure your ankles and a lapstrap your hips. Finally, the parking rim-brake is way more efficient than the ridiculous and quickly-lost Velcro strip that came with the Shark.

Johnny uses the trike mainly to exercise his dog (registered name Ludo, Spawn of Satan) around the local lanes. In common with most dedicated hand-bikes the seat is close to the ground; if you are an old fart like Johnny, your aching shoulders will love anything sturdy that you can use as a staging-post, as you haul your sorry ass back up to the wheelchair. Living as we do in a hops heartland, where are all the beer crates?

There are those amongst us who would rather eat worms than be pushed in a wheelchair. But I suggest it’s a small price to pay for the opportunity to paddle in the sea or build a sandcastle without getting bogged down to your axles.

Balloon-tyred beach wheelchairs are increasingly a feature of our seaside resorts. The Channel Island of Jersey has six of them, strategically placed on the biggest sandy beaches by the BeachAbility charity and ready for free loan to visitors and residents. For the less mobile a hoist is also available, but you may need to give notice to get it in the right place.

Johnny phoned on a whim one sunny Saturday morning and coordinator Mig said she could be at the Gorey site in 15 minutes. We needed a little more time than that but we soon met her in the Long Beach car-park, where the chair is kept in a small locked shed. The size of the tyres can make transferring tricky so a sliding board is to hand.

The previous day I had taken my standard chair onto the hard sand of le Hocq at low tide. Even if the way ahead looks flat and firm, there are soft patches everywhere and even with a Freewheel I soon got stuck. On the beach chair even the fine sand, above the high-water mark, was a breeze — for me obviously but for Chris and Pippa too. We rolled down to the sea and watched the dogs going loopy in the shallows.

I considered swimming but it would have been a scramble to get back on and, these days, I am taking care of my shoulders. And you can only go so far into the sea before the chair starts to float. I hadn’t thought of that.

We rolled back to the soft sand at the sea wall and bought bacon-and-egg rolls for breakfast. A simple pleasure and one I had not fully enjoyed for 30 years. Back in the car-park, the excellent Mig was waiting patiently at the shed, looking after my own chair.